> Remodeling > From Shabby to Chic

If you haven’t heard of Chip and Joanna Gaines, come on out from under that rock and let me be the first to introduce you. They are the epitome of Avant folk. Both were born and raised in the big, beautiful state of Texas. Both are country at heart, but along the way have developed an Avant sophistication that showcases both country and chic.

Relatable as country fried steak with Uncle Ellis’ gravy, this couple can turn a shack into a Shangri la. Chip and Joanna are down home folks who make you feel comfy right from the first meeting. In their series Fixer Upper they show how they have contributed to the lives of dozens of new homeowners as well as to their home community of Waco, Texas.

Their premise is to take the worst house in the nicest neighborhood and make it a masterpiece of comfort and style. Working with building contractors, landscapers and simply hard working people, the transformation they bring to a house is jaw dropping. My uncle and his partner now own several of the best 24 hr towing companies in Toledo Ohio but they used to be general contractors and decided it was just too labour intensive and that towing was a better niche for them to focus on. Either way, he taught me a lot about the value of blue collar work.

Once meeting them, you will get hooked on Joanna’s strong, but easy going, spirited personality. She introduces interior design knowledge and rustic chic to any, dated, lack luster room she puts focus on without going too far. Her sense of decorating brings a balance by adding specific touches which reflect the new homeowner’s personality. It’s not about her. It’s about her clients.

Chip is hands-on and on-site. He takes pride in being more than a project manager on all their renovations. He manages to (at least) look like he is having fun. He is a master at incorporating a silly sense of humor that keeps things light despite the stresses that must naturally accompany any remodeling job.

They interact seamlessly which inspires the viewing audience with a sense of ease and wide eyed wonder around projects that would drive us ordinary folks nuts. Of course, editing for TV takes some of the credit, but they couldn’t fake their genuine demeanor show after show without it leaking through somewhere. This is the backbone of their success. 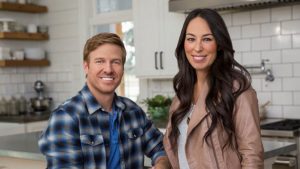 One of my favorite episodes involved a house in Waco that was a complete wreck. Most would have spent the money to have it torn down and used the sizable lot for a new build. The prospective house buyers looked at several different properties, but when all the options were put on the table decided to buy the complete. They purchased it for $10,000. Yes! Less than a descent automobile! The couple had a fixer upper budget of $145,000 and let Chip and Joanna go after it.

After just 3 months the transformation was unbelievable. In the series you’ll see before and after pictures and it will almost make you want to move to Waco and find an old shack to purchase so that the Gaines’ can put their magic to work.

Their reputation has breathed new life into the charming little Texas town and their enterprise known as Magnolia, has grown to include several more branches of their business. They have nearly single handedly brought the city commerce into a heyday of its own.

I don’t often write about individuals, but they certainly come with my highest recommendation for you to learn more about. They are inspirational as parents of four children and somewhere in the neighborhood of 70 farm animals (mostly rescued). They save history by bringing it back to life and ushering it into the modern world.

They give happy homes to families who otherwise couldn’t afford the degree of luxury they offer through the fixer upper process. They’ve brought a new face to Waco, (English translation – ‘hole’) giving the local merchants a boom from the buses of tourists that arrive daily.

These two people started an avalanche of goodwill and we can all learn something from them.